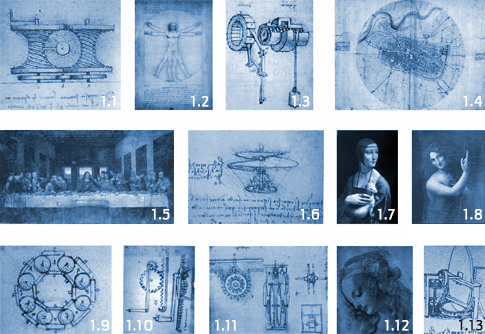 1.1. Leonardo’s design for a worm gear which, in its basic construction, is still frequently used today. Modern applications include power gears and actuators, for example.

1.2. The "Vitruvian Man" is a drawing by Leonardo da Vinci from the year 1492. With this study in proportions, Leonardo illustrates the thesis of Vitruvius (a Roman architect who lived from approximately 70 B.C. to 10 B.C.). The upright, standing figure of a man fits into the geometric shape of a square as well as a circle.

1.3. This sketch shows a lifting device with a ratchet mechanism. Such ratchets are used to prevent the uncontrolled reverse rotation of a shaft. An example is the cable winch.

1.4. This drawing is possibly the first city street map in history. It depicts the Italian city of Imola. In order to gather the data for the drawing, Leonardo paced the city street by street. For the measurements he used instruments which he designed himself. The representation is so accurate that, based on the map, even today one can orient oneself in the historic city centre of Imola, which has changed little since Leonardo’s time.

1.5. The "Last Supper" is one of the most famous mural paintings in the world. Leonardo created it in the years 1494 to 1498 for the Milanese Duke Ludovico Sforza. It is located in the Dominican church Santa Maria delle Grazie in Milan, and represents the pinnacle of Leonardo’s artistic works!

1.6. This study of a propeller was designed by Leonardo probably around 1471 as stage machinery for the theatre. Some historians of technology regard it as an early precursor of the helicopter. However, there is nothing to indicate that Leonardo believed the device to be capable of flight.

1.7. The portrait of the “Lady with an Ermine” is one of the most famous of Leonardo’s paintings. It was created in the time from 1489 to 1490, and today is often described as the first modern portrait in history. It is housed in the Muzeum Narodowe (National Museum) in Krakow.

1.9. Leonardo’s design for a roller bearing.

1.10. Device for converting a rotational motion into a translational motion. A modern application can be found in electromotive linear drives.

1.11. This drawing depicts a clock mechanism that can be regarded as a model for modern mechanical clocks.

1.13. This drawing depicts a manually operated lens grinding machine, designed by Leonardo for grinding concave mirrors. The turning of a manual crank transfers a rotary motion to a horizontal stone disk (turntable) and a vertical stone disk (grinding wheel). By means of the different circular motions of the disks the concave mirror lying on the turntable is hollowed out and polished.